The Project of a Generation: Plan Nord 2011

The Plan Nord is a development strategy launched by the Government of Québec in 2011, which covers the territory north of the 49th parallel, equivalent to 72% of Québec’s area. It aims to create economic returns and increase the labour market for a population of over 120 000 people, including 40 000 Aboriginals, while respecting the communities residing this territory. Plan Nord’s purpose has been to open up “new horizons to future generations of Quebecers and [to] offer the world the example of modern, sustainable, harmonious development.” (Plan Nord 2011, 7)

As a result of the resources that can be found in the territory, Northern Québec has enormous economic potential. A vital point in the Plan Nord has been to protect this potential, by fostering economic development. For instance, to secure the regeneration of Northern Québec’s mineral resources, it has been important to obtain data from the area, rehabilitate and find new mining sites, and encourage Aboriginal participation in these initiatives (Plan Nord 2011, 64).

To ensure that industrial activities do not harm the northern ecosystem, the government’s plan has been to gain extra knowledge of the flora and fauna that Northern Québec has to offer, and the considerations that follow from this research will lead the process. However, the action plan’s most important step to preserve Québec’s biodiversity is to assign over 10% of the territory for conservation purposes.

“Northern Québec has a wealth of resources, but its main asset is neither in the land nor in the water, but is instead its residents.” (Plan Nord 2011, 29). Accordingly, giving the Quebecers a voice in the project by establishing the “Societé du Plan Nord,” has been an important goal. The Societé consists of various representatives, such as First Nations and Inuit, the government of Québec, and entrepreneurs. It mission is to:

Furthermore, existing agreements with Aboriginal nations have been maintained, while the Plan Nord is also sufficiently flexible to future developments in land claims.

To protect the wellbeing of its inhabitants, Plan Nord includes projects regarding education, manpower, housing, health, and culture. For instance, it includes plans to offer postsecondary education and trade training, as well as providing 840 new housing units to keep up with the projected population growth. Finally, since the incidence of ill health and psychosocial issues in Northern Québec, and especially in Aboriginal communities, is higher than in the rest of the province, the Plan Nord will invest in the availability of health and social services.

For instance one of the initiatives aims to train Aboriginal clinical staff, provide the necessary tools to give communities access to needed services, while cutting costs and time spent travelling for healthcare. Cultural revitalization and heritage preservation was a connected aspect of the 2011 plan that would be equally applied to aboriginal and non-aboriginal communities above the 49th parallel and give the public “an opportunity to rediscover the North” (46). These measure include strengthening existing cultural institutions and infrastructures, measures for cultural competency in business, as well as promoting artists through the application of Politique d’intégration des arts à l’architecture et à l’environnement (46).

The Plan Nord estimated that proposed projects from 2011 to 2016 would require an investment equivalent to a total of $1.625 billion of which $1.2 billion will be invested in infrastructures, $382 million in social services, and $52 million for the Société du Plan Nord and connected promotional activities. The provincial government is expecting that the development strategy and connected investments will generate, over 25 years, $80 billion in public and private investments.

All in all, the Plan Nord had been designed to make Northern Québec a model for the rest of the world in ensuring the territory’s economic development “through a respectful, modern partnership with the First Nations, the Inuit and local communities,” and with respect for the environment and biodiversity. (Plan Nord 2011, 119).  Yet above all, the Plan Nord’s ultimate goal is to preserve Northern Québec’s unique territory for future generations. The official slogan of Plan Nord is not in vain: “Building Northern Québec Together: The Project of a Generation.”(Plan Nord 2011, I).

Jean Charest’s 2008 plan was officially launched in 2011 but slightly changed trajectories in 2012 when the Parti Quebecois came to power and Pauline Marois introduced “Plan Nord pour tous”, which was very similar to the 2008 version. Finally, in 2014, liberal party leader Philippe Couillard revived the plan. As of 2015, Plan Nord is the main long-term vision for reviving Quebec’s economy, along with the Maritime strategy. The project’s new vision is set in a timeframe of 20 years (2015-2035) with a short-term action plan of 5 years (2015-2020). The newly elaborated plan is very much in line with the previous visions.

Plan Nord 2.0 continues to try to achieve the goals set out in the previous plan. For instance, Plan Nord 2.0 has maintained the territory of application as that above the 49th parallel. Additionally, it still places a great emphasis on the development of infrastructure in a broad sense, which includes transportation as well as communication. Apart from these elements, Plan Nord 2.0 maintains its goal to protect at least fifty per cent of the territory from industrial activities, while at the same time increase environmental knowledge and awareness.

Because the territory above the 49th parallel has a population of over 120.000 inhabitants, the government will continue to improve living conditions and provide access to basic health and social services. The area above the 49th parallel is an environment with significant mineral resources. Thus, the Plan Nord 2.0 will continue to explore the area for mining sites and at the same time will encourage the Aboriginal communities to participate in the process to generate extensive employment.

The Société is supported by the Assembly of Partners that is constituted by representatives of each community touched by the Plan Nord. The Assembly may share their opinion on any matter submitted by the Société du Plan Nord. The main point of contact with aboriginal communities in northern Quebec will remain the Secrétariat aux affaires autochtones du Québec, its original mandate being to ensure communication between aboriginal communities and the provincial government.

The Secrétariat will keep its original function but will also ensure that agreements signed between the government of Quebec and aboriginal communities are implemented effectively. Although this is a positive aspect for the Aboriginal communities included, certain nations were omitted from the Société du Plan and the Assembly of Partners, including all nations residing in the lower Saguenay Lac Saint-Jean and Côte Nord, principally the Innu and Atikamekw Nations.

While the new proposal has similar objectives and concepts it also brings about new changes that serve to make the strategy more environmentally and community friendly. One specific change that is brought by the new Plan Nord is that they feature discussions about mining in the North’s developmental issues that have arisen after the dejected first attempt of the project (8).

Regarding Aboriginals nations involved, it is declared that the updated Plan Nord will include “the constitutional obligation of consultation” regarding resource development on traditional Aboriginal territory (8). Another distinct new feature brought by the new Plan Nord proposal is to address housing issues such as overcrowding in Nunavik. Among proposed measures includes the revision of Home Ownership program, an additional 90 new housing units, and the establishment of “northern housing laboratory” to stimulate research and participated in local projects (pp. 27-28).

In the 2011 strategy, Aboriginals peoples were promised priority to employment and training in industries, follow ups on environmental impacts, and establishment of a committee that would ensure the commitment of corporations (22). In 2015, the objectives concerning Aboriginal peoples target them not as individuals but as a community. In other words, the solutions are focused on changes that will support community development and create a positive environment for future generations that wish to maintain local values and way of life (27). Such targets include finding measures for properly quantifying demographic changes and take those measures into account by providing better information on labour market, promote student retention, and encourage women participation in resource development fields.

On the short term (2015-2020) the Plan Nord is offering “several ways for local and aboriginal communities to improve their quality of life, consolidate their sense of belonging and pride, and keep young people in the community”, including sufficient control over the effects the project has on the “social fabric, culture, land use and public infrastructure.” (Plan Nord, 2015, p.23) The government will develop specific planning tools to adapt to Northern Quebec’s situation, including health care and municipal infrastructure. They will also ensure that aboriginal communities “have the resources they need to revitalize their territory, manage development effectively and reap the associated benefits.”(Plan Nord, 2015, p. 23) A part of those benefits will be to increase support for cultural development.

Government of Quebec. (2011). Plan Nord: Building Northern Quebec Together, the Project of a Generation. 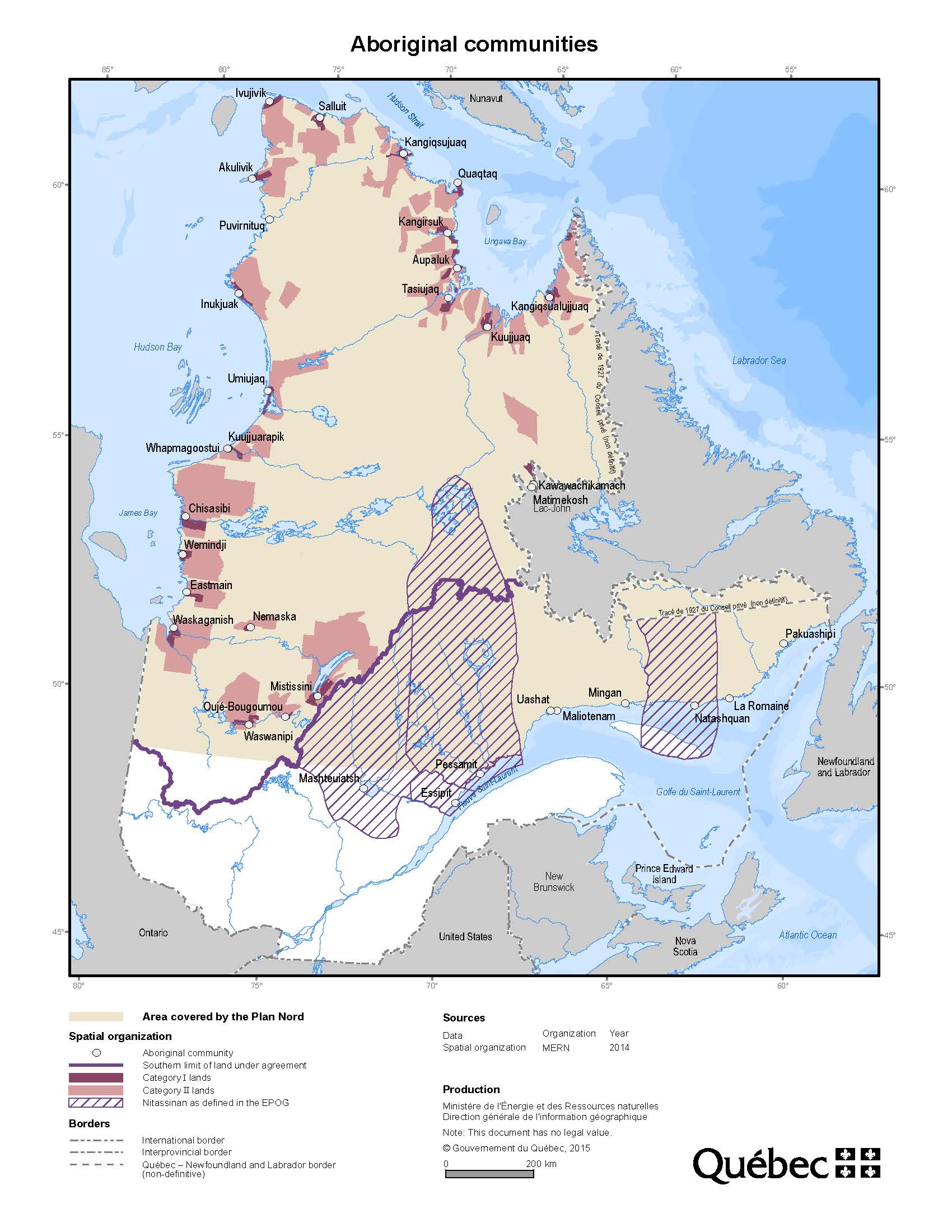