The government began legally defining Indians in the 1850s using broad criteria including anyone married, living among, or adopted into Indian communities[1] , but soon after narrowed this criteria, beginning a long history of imposing Canadian-style governance on Indigenous peoples[2] . In 1857, the government implemented an involuntary enfranchisement policy, which took away Indian status for one who obtained a university degree or who became a professional[3]. By 1869, women who married non-native men lost their Indian status while non-native women who married Indian men gained status, disrupting matrilineal lineage patterns in many communities. 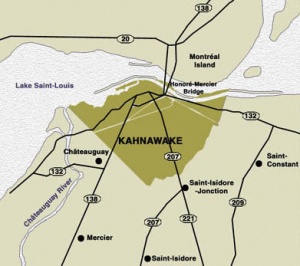 Kahnawake is a Mohawk community located near Montreal, Quebec. In 2010, the local Band council sent eviction letters to 26 non-native individuals to evict them from the territory

After Bill-C31 was introduced in 1985, which sought to correct gender discrimination in the Indian Act by restoring lost status to women, bands also gained the right to determine local membership codes, with the approval of the Minister of Indian Affairs. However, the Federal government retained a one-parent (or 50% Indian blood-quantum criteria) set out in the Indian Act, which is why today an Indian may be registered with Aboriginal and Northern Affairs Canada [4], but not on the membership list of a specific community. Additionally, the Crown retains control over Indian reserve land [5] , does not recognize traditional forms of government, and the Minister has ultimate political authority over band decisions. Disputes over the classes of Indian created by legislation, access to federal benefits tied to status, and authority to determine one’s own membership criteria and mode of governance have given rise to conflicts in many Indigenous communities [6] . Despite the control the Act provides to Aboriginal Affairs and the Minister, it is one of the only documents that recognizes Indians’ special role in Canada. So, while membership to a community comes with a certain set of rights, like rights to own property, vote in band elections, and to be buried in one’s community, it also carries connotations of citizenship to a specific nation, and has broader implications for Indigenous identity. Status, on the other hand, is merely about accessing federal benefits, a line which the Indian Act has blurred. 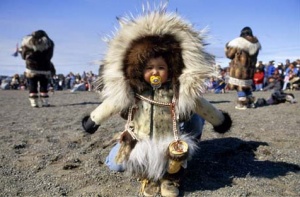 In Kahnawake, which is governed by Indian Act and who controls its own membership, a moratorium on intermarriages was established in 1981 to prevent further loss of culture, given the close proximity of the reserve to non-native communities. It deprived anyone marrying a non-native of federal benefits and the right to live on the reserve. After 1984, individuals had to meet a 50% blood quantum requirement to be a member of Kahnawake. In 2003, the band council enacted a new Membership Code, which sought to erase the concept of blood quantum, creating the Council of Elders to decide on membership on cultural grounds. The process was criticized as further dividing the community [7] because the implementation was flawed, inconsistent with cultural approaches, discriminatory [8] , and created categories of members, including: full members eligible at birth; those born of one member who must apply at 18; and non-member residents, which includes children adopted into families but who have no Indigenous lineage [9] . Presently, the law is suspended because it lacked continued support from the community. 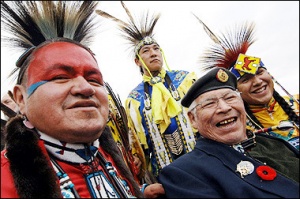 Some Indigenous groups in Canada are not governed by the Indian Act, and don’t have exclusionary criteria, usually because they are located in isolated territories and are at less risk for loss of culture through inter-marriage. For example, band membership for the Cree and Inuit is regulated by the James Bay and Northern Quebec Agreement, and membership requires approval of the majority of members of the band council. Approval is based on one parent lineage recognized by the community, residency, or in the case of an adopted child, being a minor at the time of adoption.

For the Cree, an ancestor must be a member of one of the bands of Quebec to be a member, whereas for the Inuit the ancestor must be born in Quebec [10]. In the case of marriage between individuals from different communities, membership is transferrable. Children may choose at the age of 18 to which community they will belong [11]. In the case of marriage to a non-member, the person does not lose access to benefits, providing they live in or return to their territory every 10 years. Members are not stripped of their rights when they inter-marry. Appeals regarding membership are directed to the Quebec Native Appeal Board.

Section 88 of the Indian Act was included in 1951 and provides for the general application of provincial law on First Nations communities. Although certain conditions apply, this section can have broad implications in matters as varied as social services, labour relations and hunting.[12]

88. Subject to the terms of any treaty and any other Act of Parliament, all laws of general application from time to time in force in any province are applicable to and in respect of Indians in the province, except to the extent that those laws are inconsistent with this Act or any order, rule, regulation or by-law made thereunder, and except to the extent that those laws make provision for any matter for which provision is made by or under this Act.[13]

The practical application of sec. 88 has met various legal challenges that have forced the court to clarify its application in light of Aboriginal rights and autonomy. Since First Nations under the Indian Act are a federal responsibility, provincial law should not have jurisdictional weight, yet sec 88 allows the federal legislature to delegate powers to the provinces. Thus: Can a provincial law directly apply to Indians? Does provincial legislation apply of its own force? Can a province extinguish Aboriginal title?

Section 74 of the Indian Act permits the Minister of Indian Affairs to impose band council elections instead of respecting traditional Aboriginal government.

74. (1) Whenever he deems it advisable for the good government of a band, the Minister may declare by order that after a day to be named therein the council of the band, consisting of a chief and councillors, shall be selected by elections to be held in accordance with this Act.

Although it has not been imposed since 1924, its existence is a clear violation of Aboriginal and Treaty Rights. The Canadian Constitution protects Aboriginal and Treaty Rights in its section 35. Further, the UN Declaration on the Rights of Indigenous Peoples protects Aboriginal peoples right to practice traditional government. The Barriere Lake case is the only contemporary instance in which the federal government has chosen to enforce local elections despite the existing customary governance structures. The ongoing conflict is related to the federal and provincial failure to implement the Trilateral Land Management Agreement signed in 1991 while allowing increased resource exploitation on Barriere Lake traditional territory.

The Canadian government doesn’t want to deal with our Customary Chief and Council because we are demanding that the federal and Quebec governments implement agreements they signed with us regarding the exploitation of our lands and resources. So rather than recognize me, they want to do away with our customary system of government by which I [Jean Maurice Matchewan] was selected And while they are not recognizing our community’s legitimate leadership, Quebec has been taking advantage by illegally allowing forestry companies to clear-cut our forests in violation of our Trilateral agreement.[16]

Listen to Algonquins of Barriere Lake vs. Section 74 radio program by Candice Cascanette

In 2002, Indian Affairs Minister Robert Nault introduced the First Nations Governance Act (FNGA) in the House of Commons as Bill C-61 (later to be reintroduced as Bill C-7). The FNGA would have replaced governance structures as expressed by the Indian Act (Elections (sec. 74-80 and powers of the council (sec.81-86) by “greater authority, more effective administrative procedures, and by ensuring local control over the daily management of Aboriginal affairs.”[17]

Aboriginal Peoples argued that this legislation was a form of paternalistic dictatorship on how to run their lives, and would deny their traditional forms of governance. Further, more important to consider is the realities of poverty, substandard healthcare, substandard education, and poor housing on reserves. As the Canadian Bar Association stated:

Unfortunately, the FNGA does not provide a basis for developing effective governance regimes that reflect the needs and aspirations of aboriginal communities in Canada[…]Instead, it would act as a leveler, adding some certainty to the legal earmarks of a band administration structure but removing distinctiveness among First Nations and limiting First Nations to Indian Act bands and reserves.[18]

The First Nations Governance Act was not passed and was discarded by the Martin government in 2004.