Beyond the Indian Act?

The debate regarding the Indian Act in Canada offers two options: one is to completely abolish the statute; the second would be to reform it in order to meet the pressing issues of First Nations. The purpose of the Indian Act as enacted in 1876 provided the federal government control over key aspects concerning Aboriginal People’s lives. The main features of the current Act are as follows: definition and registration of the Indian status, the possession of lands on the reserves, and the self-governance of aboriginal people through elections of chiefs and band councils.[1] 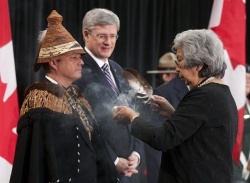 Since its implementation, the Indian Act underwent various amendments. Most notably, was the effort by the Trudeau government in 1969 to repeal the Indian Act and retract the central government’s responsibility to Aboriginal Peoples.[2] The White Paper proposed to end the federal intervention in matters of First Nations and erase the special status given to Aboriginal Peoples of Canada.[3] The proposal was rejected by both the general public and First Nations communities, mostly due to the fact that it was not a collaborative effort since the most affected by the Act were not properly consulted. The proposal also failed to address the key elements such as the aboriginal rights, historic treaty agreements, title to the lands, as well as numerous issues resulting from years of discrimination and mistreatment. As Harold Cardinal succinctly stated:

In spite of all government attempts to convince Indians to accept the white paper, their efforts will fail, because Indians understand that the path outlined by the Department of Indian Affairs through its mouthpiece, the Honorable Mr. Chrétien, leads directly to cultural genocide. We will not walk this path.

Subsequent to the backlash, the proposed legislation was halted in 1971. Despite the aforementioned failed effort to eliminate the Indian Act altogether, there is still a need to achieve that goal. Moving beyond the Indian act requires this achievement, and ultimately establishing self-governance according to cultural and traditional values of First Nations. The housing crisis of Attawapiskat in 2011 received international coverage, and it was a strong reminder to Aboriginal leaders of the urgency to restructure the relation between the Canadian government and First Nations. The National chief of the Assembly of First Nations, Shawn Atleo, expressed the need to do so. As most of Indigenous communities, he believes that The Indian Act is oppressive and impedes progress; however, he is reluctant when it comes to its full repeal.[4] This sentiment is shared by other chiefs who are concerned that without the Indian Act, the issues faced by First Nation communities will worsen, and assimilation will follow since it implies the suspension of federal responsibility towards First Nations.[5] There is also distress that the federal government will easily opt out of its obligations to treaties and historic agreements. Many First Nations do benefit from the status gained under the Indian Act as Band governments, chiefs and councilors. Eliminating the Act would jeopardize their position of power within their own communities.

According to Ken Coates (2008)[6], it is imperative to understand the Indian Act not as a well-meaning attempt at negotiating Aboriginal-State relations, but as having the core objective of making the Aboriginal Peoples ‘wards of the state’ and to ensure cultural genocide through the rhetoric of “civilization, protection and assimilation”.[7] When one comes to understand the Indian Act on these terms, then it becomes clear that the power of the Canadian government over the lives of the Aboriginal Peoples of Canada is one of oppression and control, that in turn created dysfunction within the lives of generations of Aboriginal Peoples, and which cannot be undone with the simple act of erasing it.

Although Coates recognizes the power of the legislation over Indigenous people, he, nonetheless, believes that the importance of the Act is slowly being eroded and “is no longer an uncontestable part of the Aboriginal landscape in Canada.”[8] As examples, there is the receding dominance of the Aboriginal Affairs and Northern Development department over aboriginal communities, and more than 80% of the federal funds spent in those communities are managed by their band and tribal elected officials. Moreover, recent land claim and self-governance agreements have redefined First Nations’ relationships with the federal government. The Yukon First Nations Umbrella Agreement (1995) and the Nisga’a Agreement (2000) are two examples that demonstrate the increase control of First Nations over the institutional structures of their government, including legislative powers and culturally appropriate governing practices.

Self-government as practiced by the Nisga’a and the Yukon First Nations is still very young and yet to have any real conclusive outcomes. There are many obstacles to overcome, both in the administration of self-government as well as dealing with the impacts of the Indian Act on the psychology of the people, “The Indian Act is both a symbol of cultural and political domination but, in a very real and pervasive sense, the cause of much Aboriginal suffering, discouragement and cultural loss.”[9] Yet, focus is slowly moving away from the Indian Act and towards redefining relationships between the Canadian government and the Aboriginal communities of Canada.

John Borrows (2008)[10] has expressed the need to completely abolish the Indian Act as the ultimate way of true self-determination. In an article entitled Seven Generations, Seven Teachings: Ending the Indian Act, he states that the Indian Act has caused great harm to the six generations of his family, as it created constraints of freedom and progress: 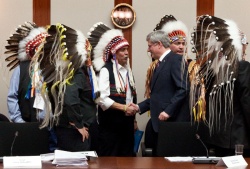 He argues that moving beyond the Indian Act requires more than legislation. It implies a reflection on the emotional relationships Aboriginal Peoples have with one another and with others. The integration of non-Aboriginal people into their communities and the resultant children of these unions must not be framed as “marrying out” nor as “half-blood”. They need to be understood in terms of love: loving one’s life partner, loving one’s children, and loving one’s culture in order to pass it down, no matter the blood quantum. Borrows presents the seven teachings of the Anishnawbe as relational values that can guide First Nations away from the Indian Act and its psychological impacts: wisdom, love, respect, bravery, humility, honesty and truth. He underscores the Aboriginal youth’s responsibility to end the Indian Act, as well as the previous generations’ responsibility to help them. The underlying framework, Borrows argues, is to act with goodness and love in order to overcome the Indian Act. Among others, in practical terms this implies honoring women’s central role within First Nations communities, strengthening on-and-off reserve relationships and extending kinship ties, revitalizing cultural and linguistic heritage, and acknowledging the political standing of First Nations within Canada.

With time, the Indian Act will lose its significance as both Canadian and First Nations governments expand collaboration under the terms and conditions of agreements based on mutual recognition of legitimacy and acceptance of Aboriginal lawmakers’ input.[12] The general consensus among First Nations is that the status quo of the Indian Act is completely unacceptable. Change must take place, either through comprehensive reform of the legislation, or its overall annulment. As the debate continues, First Nations are taking a wide variety of approaches and methods to achieve self-determined futures.

Already, as with Bill C-31, Aboriginal peoples' sustained political pressure has closed the gap in terms of human rights for First Nations living under the Indian Act when section 67 of the Canadian Human Rights Act was repealed in 2011.

The Canadian Human Rights Act is meant to protect Canadians from discriminatory practices in employment and services within federal jurisdiction. It was passed into law in 1977 and stipulated eleven (11) grounds of discrimination. These include race, national or ethnic origin, colour, religion, age, sex (including pregnancy and childbirth), sexual orientation, marital status, family status, mental or physical disability (including previous or present drug or alcohol dependence) and pardoned conviction [13] In contrast to these grounds for discrimination, the original Act included a restriction under section 67. Section 67 stated that no claims of human rights violations covered by the Canadian Human Rights Act could be made if it is a result of a “…provision of the Indian Act or any provision made under or pursuant to that Act.”[14]Not only is this in itself something of a human rights violation, it disproportionately affected Aboriginal peoples, especially those living on reserves as decisions made by band councils or on reserve organizations were exempt from application of the Charter.

The Canadian government states they had initially included section 67 in the Act as at the time they were engaged in discussion on reforming the Indian Act. The government had not wanted to allow for provisions under the Indian Act to be found discriminatory under the Canadian Human Rights Act before the discussions for revision had been completed with the Aboriginal groups.[15]After these discussions had concluded the section remained in place much longer than was possibly intended. Though occasionally it had been attempted to begin the process of repealing it, these attempts were interrupted by prorogation or dissolution of Parliament.

Finally in June 2011 the repeal of section 67 in the Canadian Human Rights Act came into effect. A message regarding the repeal from the Chief Commissioner of the Canadian Human Rights Commission stated that “[t]his exciting and historic change exemplifies the evolutionary nature of human rights in Canada—as our society evolves, new challenges emerge” [16] Though it may certainly be true that this was an exciting and historic change, it should not have even needed to be a part of the evolutionary process of Canada’s human rights The Canadian Human Rights Commission has determined two priorities as a result of the repeal. The first of which “…is to work with First Nations to develop and increase their capacity to address human rights issues within their own communities”[17] And the second of which “…is to provide federally regulated organizations with the tools and information necessary to create a self-sustaining human rights culture—an environment where human rights are integrated into daily practice, where every individual feels respected and equal; and where all can make for themselves the careers that they are able and wish to have, free from discrimination.”[18]

Interview with Doris Morning Star Orr, an elder from the Cree Nation, talking about the Indian Act and its impact on Aboriginal People of Canada. Interviewed by Yves Mutuyimana