Cultural Impacts – Banning of the Potlatch 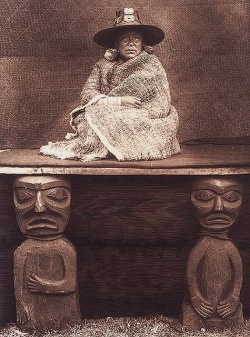 Canada is known for being a multicultural nation, where it accepts people from all over the world with different belief systems and cultural practices. However, when it comes to First Nations people, the Canadian government maintained unjust assimilatory laws restricting the practice of cultural traditions for over half a century [1]. For a very long period of time, the Natives were considered savages and uncivilized because of their cultural practices and belief systems [2]. In order to accelerate the civilization of Aboriginal peoples, the government amended the Indian Act in 1885 to prohibit religious ceremonies, dances, and any form of public cultural exhibition. Section 3 of the act read as follows:

Every Indian or other person who engages in or assists in celebrating the Indian festival known as the "Potlach" or in the Indian dance known as the "Tamanawas" is guilty of a misdemeanour, and shall be liable to imprisonment for a term of not more than six nor less than two months in any gaol or other place of confinement; and any Indian or other person who encourages, either directly of indirectly, an Indian or Indians to get up such a festival or dance, or to celebrate the same, or who shall assist in the celebration of same is guilty of a like offense, and shall be liable to the same punishment. 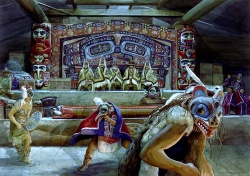 The practice of potlatch, a First Nation tradition characteristic of the Northwest Coast nations, is based on both gift giving and exchange of goods during community celebrations. Overall, it focuses on the redistribution and reciprocity of wealth [3]. It was "a mechanism for social integration" and an established economic system. Missionaries and Indian Agents, regarded the potlatch as an impediment towards assimilation that condoned “profligacy, debauchery and squalor” and a “worse than useless custom” [4]. Intense lobbying led the federal department to make the potlatch an indictable criminal offence.

For the First Nations, however, such practices were focused towards maintaining equality and peace [5]. Chief O'wax̱a̱laga̱lis of the Kwagu'ł describes the potlatch in his famous speech to anthropologist Franz Boas: “we will dance when our laws command us to dance, and we will feast when our hearts desire to feast. Do we ask the white man, ‘Do as the Indian does?’ It is a strict law that bids us dance. It is a strict law that bids us to distribute our property among our friends and neighbors. It is a good law. Let the white man observe his law; we shall observe ours. And now, if you come to forbid us dance, be gone. If not, you will be welcome to us,” [6].

Although the ban was enacted, it was not an ultimate deterrence of any performance of religious or cultural ceremonies (i.e the potlatch). In many cases, the First Nations were resilient and sought alternatives to the ban. For example, they used the legal system to their advantage, legitimizing their traditions by arguing that: the potlatch was a customary law equally legitimate as any other law; that it was a ‘celebration’ similar to other non-Aboriginal festivities such as Christmas; and since it represented an economic exchange its ban infringed laws of contract and debt. In some cases, First Nations found ways to carry on the potlatch tradition by dividing it into public/official dances and private/unofficial gift giving, thereby making it harder to prosecute. In other cases, they used the ban to settle internal disputes and deter payment of debts or to overthrow the traditional governing system. In this way, the force of the colonial legal system in respect to cultural practice indeed had advantages for the some First Nations.

Until this law was repealed in the 1951 Indian Act amendment which decriminalized the performance of cultural ceremonies such as the potlatch and Tamanawa dances, the federal government continued to restrict the expression of cultural practices, making it nearly impossible to openly identify one's indigenousness:

Duane Aucoin talks about the importance of potlatch in present-day Tlingit life.

Cole, D., & Chaikin, I. (1995). An iron hand upon the people: The law against the potlatch on the northwest coast. Washington: University of Washington Press.

Cole, D. (1991). "The History of the Kwakiutl Potlatch", In A. Jonaitis (ed) Chiefly Feasts: The Enduring Kwakiutl Potlatch. Seattle and London: The American Museum of Natural History, (135-176).