Interwar period and the 1951 Indian Act 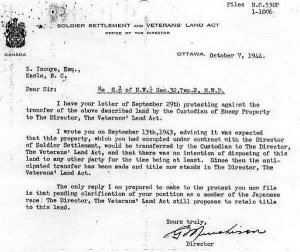 When the Aboriginal Canadian soldiers returned home from the First World War, they came with hope of a better standard of living. Although conditions in some parts of Canada had improved, it was not the same for the First Nations communities. During World War I, more than 3,500 Aboriginals were enlisted into the Canadian military [1]. ‘These returned Aboriginal soldiers [were] subject to the provisions of the Indian Act and [were] in the same position as they were before enlisting’ [2] Even with the efforts and sacrifices the Aboriginal soldiers had made for their country, they remained in the lower end of the economic ladder. One can imagine the frustration and disappointment they felt, especially when comparing themselves to non-Aboriginal soldiers.

The Greater Production Act was established to help people recover from the war, and to increase the agricultural production in response to the war needs. The main concern of the Act was the acquisition of Aboriginal lands for settlement and agricultural purposes. Most of those lands were located in the Western provinces of Canada, were in possession of the Aboriginals, and were unused. The government encouraged the farming of those lands. Despite the opposition of some leaders in intervening on the reserve lands, the federal government thrust its repressive policies on the Aboriginals. The results of the Greater Production Act were mixed and could not be stated as a success or a failure, however, Canada’s agricultural production increased [3]. 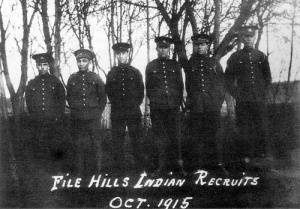 In 1919, The Soldier Settlement Act was established to help the returning soldiers to reinstate themselves into the society [4]. The Act supported the soldiers who were returning home from the war, and it did not exclude Aboriginals. Nonetheless, “for Indian veterans in western Canada, the Act conflicted with an amendment to the Indian Act of 1906 […]” [5]. The amendment which conflicted with the Indian Act affirms:

No Indian or non-treaty Indian resident in the provinces of Manitoba, Saskatchewan, Alberta, or the Territories shall be held capable of having acquired or of acquiring a homestead or pre-emption right under any Act respecting Dominion lands, to a quarter section... in any surveyed or unsurveyed land in the said provinces or territories [6]. 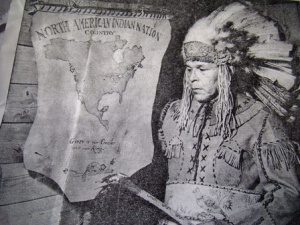 Years later, during World War II, 3000 Aboriginal men were enlisted into the Canadian army and 200 lost their lives. As the discrimination against the Aboriginals continued during World War II, Jules Sioui, leader of the Committee for the Protection of Indian Rights, issued a letter to the First Nations Chiefs for a General Assembly [8]. Jules Sioui’s purpose was to abstain from the Indian Act restrictions. In 1943, Sioui convened a First Convention of Indian delegates in Ottawa to prepare a petition on conscription and to show the position of Indian delegation to officials of the Justice Department. The Second Convention was convened in 1944 where an emphasis had been put in protecting the land and rights of all Aboriginal people in Canada. As a result, two national Aboriginal organizations were created; namely the Pan Canadian Indian Organization-North American Indian Brotherhood and the North American Indian Nation Government.