In 1974 the Office of Native Land Claims was established following the Calder decision that recognized the Aboriginal title to land. Generally there are two types of Aboriginal claims that take place in Canada. These claims are often referred to as “land claims”. Comprehensive claims always involve land while specific claims are not necessarily related to land. A comprehensive claim arises in areas where past treaties did not deal with land rights appropriately or other legal means have been taken. A specific land claim, should settle past grievances between Aboriginal people and the Canadian government and arise from “alleged non-fulfilment of Indian treaties and other lawful obligations, or the improper administration of lands and other assets under the Indian Act or formal agreements” [1]. In order to honor its obligations, the Canadian government negotiates settlements with Aboriginal governments. Occasionally land claims are settled through negotiation rather than through a claim, this way it is considered a “win-win” for both Aboriginal peoples and Canadian citizens because there is a balance of rights.

In 1981 the Native Claims Policy (NCP) was developed through examination of the Alaska Native Claims Settlement Act and the Australian Aboriginal Land Rights Act. The NCP was founded on the standards that settlement of claim should be made in consideration of the needs of all Canadians in the specific territory and should strictly correlate to traditional use of the land such as hunting and fishing and occupancy. Since Aboriginal rights are considered undefined, the government negotiates with claimants over the defining of rights and benefits within their land claim. These can include: territories, financial compensation, rights to wildlife and natural resources among others. However, in return for the land claim settlement, Aboriginal peoples must surrender their Aboriginal rights. Some communities do not consider this a possibility because it could be seen as the equivalent of losing their right of sovereignty to the Canadian government. [2]

The policy is very specific in regards to the procedure, eligibility and restrictions on land claims brought forth by aboriginal groups. In order to be considered eligible for a land claim the community must demonstrate that members of the community are descendant from the first inhabitants of the area. However, groups who have benefitted from previous settlements are not considered eligible due to the fact that they had surrendered their Aboriginal rights in a previous land claim or treaty. The procedure begins with the claimant group’s preparation of the claim, which the government determines its validity. If the government decides that the claim is valid, they can commence negotiations with the claimants. The restrictions put on land claims by the Canadian government are very specific. Should a claimant group accept the land claim settlement then they must surrender their undefined Aboriginal rights. Furthermore, the government only allows six land claims to be in the process of negotiation at one time[3]. 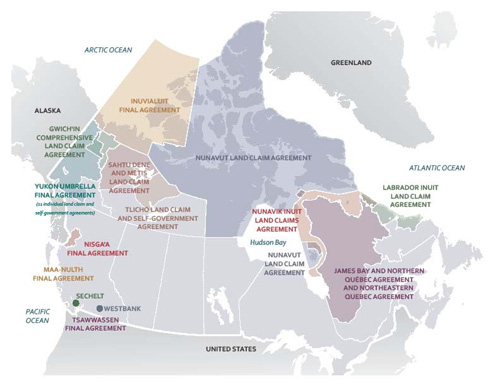 Since 1986 we have seen several amendments to the Native Claims Policy. The goal of a land claim “ is to provide certainty and clarity of rights to ownership and use of land and resources in those areas of Canada where Aboriginal title has not been dealt with by treaty or superseded by law” [4]. Land claims stipulations have been widened to include: aboriginal input in environmental decisions, self-government arrangements, and dividends in revenues produced by natural resources, to name a few. Most importantly what has come from these amendments is the negotiation of the creation of an alternative to the surrendering of Aboriginal rights after a land claim settlement.

Furthermore, for an Aboriginal group’s land claim submission to be accepted for negotiation they must fulfill an extensive list of requirements. Primarily they must demonstrate beyond a reason of a doubt that the Aboriginal community is, and always has been, an organized society. Secondly they must prove that their organized society has occupied a specific territory pre and post European settlement. Most importantly they must show that the people still utilize the occupied land for traditional purposes, such as hunting, fishing and trapping [5]

Finally, two new models replacing the extinguishment clause have been established. The first being the “modified rights model” which means that Aboriginal rights are not extinguished but modified into rights defined by the treaty such as the Nisga’a Final Agreement. The second being the “non-assertion model” which is when the group agrees to utilize only the right defined in their treaty and not assert any others, similar to the Tilcho Agreement[6]

The Innu and the government of Québec have been engaged in negotiations for a comprehensive land claims agreement since 1975. The Conseil des Atikamekw et des Montagnais (CAM) represented twelve (12) communities, three (3) Atikamekw and nine (9) Innu, in this process. As with many land claims negotiations in Canada, this one began in part as a result of the government threatening the ways and cultures of Indigenous communities by disrupting the natural environment. The claim was made to assert self-governance, focusing specifically on natural resource development. The claimants were opposed to resource development in their ancestral territory as their rights were not being recognized. They sought control over the exploitation of resources, especially that of renewable resources. In 1988, the CAM had proposed an agreement that would grant their communities control over the management of lands; including renewable and non-renewable resources, designation of conservation areas for zoning and traditional use, veto rights in relation to development in Nitassinan (traditional Innu territory) while negotiations are in progress, co-management of forestry board, establishment of a hunting, trapping and fishing working group and a Hydro Québec working group. This agreement expired in 1991 without resolution as the government was unmoving on a number of aspects.[8]

In 1994 the Québec government came up with provisions for settlement. In respects to the claimants request for self-governance it conceded to management of forest and wildlife (within designated reserve land) and share of provincial land and resource use. They stipulated that provincial legislation of general application, as outlined in the Indian Act, section 88, would still apply as well as the right of the province to expropriate land. Internal disagreements with respect to the Quebec offer led to the dissolution of CAM in the same year, with the Atikamekw undertaking negotiations on their own and the Innu splitting into two organizations, the Mamuitun Tribal Council and the Mamit Innuat Tribal Council. Since these negotiations there has been a Mamuitun Tribal Council counteroffer in 1997 and in 2004 an Agreement in Principle (Approche Commune) was signed. Although not legally binding, the Approche Commune did create a framework for the terms of any further negotiations. It recognized some Aboriginal rights, including cultural and socio-economic rights, but was limiting on territorial rights. For self-governance the Approche Commune Agreement stipulated there would be no extinguishment clause, but that the Innu would have to accept the Crown’s discretionary rights and to forgo any rights have may not be explicitly defined or addressed in the final agreement. Each community would adopt a written constitution and the management of local affairs would involve both co-decision making and autonomy. There would be limited control over justice, but within reserve land, the communities would have the decision making power over all matters that are currently within provincial jurisdiction. The claimants would hold co-decision making powers with the government over review of treaty and implementation of such. They would hold the right to make claim to future constitutional changes, however only if the claimants accept any ruling that may be in favor of the State. [9]

Mamit Innuat made an offer in 2003 that was similar to the Approche Commune, except that it insisted on ownership of on-reserve hydraulic resources, including an increased royalty for past resource development; joint committees to be formed for natural resource management; and no agreement to Indian Act fiscal exemption. With all the complications involved with negotiations between the Innu and the Québec government there still has not been a final agreement signed. Neither side thus far is willing to concede to limited control over resources and significant revenues from potential large scale development of the territory. The Quebec government maintains a “co-management” approach which implies that it wants to maintain jurisdiction over territorial rights and resources and is not conceding to any model of Aboriginal veto over development projects. Furthermore, the government makes no mention of land categories as defined in the Innu offer and instead offer two jurisdictional categories: “public lands at large” and “zones of traditional activities”. By doing so, they indirectly undermine the titles of ancestral lands and natural resources inherited by the aboriginal communities Moreover, this distinction allows for Quebec to continue exploiting land and other resources as they please for as long as Aboriginal rights have not been clarified.[10]

Another problem is that the Atikamekw and Montagnais came up with a proposal that reflected a view of independence similar to a liberal version of self-government. This appeared to have been more than the government was, and to this day is, ready to recognize. Evidently, there exists an urgent need to enlarge existing reserve lands to meet the current demands of Aboriginal communities, for the expansion of future generations and to allow for access to important resources in order to preserve the ecosystem of the wildlife without having traditional activities of hunting, trapping and fishing disrupted. The Innu continue to protest the apparent lack of good faith in the negotiation process and have erected blockades in Pessamit in 2011 and Uashat in 2012 over issues related to resource development as proposed by Québec’s Plan Nord. As the Innu negotiator, Remy Kurtess, stated “if there is no territory and no control of resources, then there is no self-government.”[11]

Thus, for aboriginal communities the goal of land claims is to obtain enough territory in order to gain full control of natural resources and ensure a prosperous self-sufficient economy, which will guarantee aboriginal participation in resource development on their territory (Charest 264). The land disputes can only be resolved once a number of changes to the process have been made. Specific interest groups, such as Hydro Quebec, should be ejected from the process to ensure that it is not corrupted by their agenda. Also, the Quebec government should come up with a process and agreement that is fair and mutual. They should allow for the extension of the lands of the native communities and return to them, their rightful ownership. Changes must be made to create a prosperous economy for the Aboriginal communities and so that they can become themselves, a self-sufficient and a self determined nation[12]. So far, sixteen comprehensive land claims have been brought into effect in Canada since 1975 to 2002 which represents a total of 861,683 square kilometers of land. Currently, over seventy mandates of comprehensive land claims settlements are underway for negotiations with Aboriginal groups and provincial and territorial governments in the following five provinces of Canada: Newfoundland and Labrador, Nova Scotia, Quebec, Ontario and British Columbia. [13]

For over 200 years, native Canadians have been relegated to the outskirts of their original land. But they have not renounced their rights and they wish to take part, too, in the country's economic life. This special report presents the context of discussions between governments and native groups on this issue.

This article explains how claims are submitted and negotiated through the six-step negotiation process and clarifies the distinction between “comprehensive land claims” and “specific claims”.

This article discusses the legal issue between Hydro Quebec`s hydroelectric 6.5 billion dollar project and the community of the Innu of Uashat Mak Mani-Utenam and how this aboriginal community came to drop legal charges in return of a $125 million compensation package.

This articles discuses the controversial project of the B.C. government allowing the development of an annual ski resort on Jumbo Mountain and the diverse reactions to this planned project from the stand point of nearby communities such as the Ktunaxa Nation and the Shuswap Indian Band.