The discourse on Aboriginal self-governance and self-determination is one that is punctuated with tension regarding land use and ownership, with each contestation reflecting the relationship between the colonizer and the colonized [1]. Central to this narrative are the developments of the Royal Commission on Aboriginal Peoples (RCAP) as well as its reports, and the Land Management Act. Both concluded between 1991 and 1999, their initial developments were a response to the Oka Crisis of 1988-90, and how it affected the discussion of Aboriginal land management. 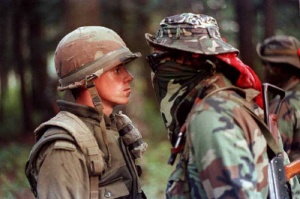 The Oka Crisis, was a violent and well publicized confrontation between the Mohawks of Kanesatake and actors of the Canadian and provincial governments (i.e the Canadian Armed Forces, Sûreté du Québec and the municipal authorities of Oka). It was a dispute over the town of Oka's decision to expand a golf course on traditional Mohawk burial grounds, territory for which the community had filed a land claim in 1977 but was however rejected in 1986 [2]. After 78 days of blockades the protest ended, however the conflict is still ongoing and was (remove these words and put a ponctuation mark).In the broader context, it was a major catalyst for the RCAP. The crisis helped increase the Canadian public’s awareness of Aboriginal peoples’s concerns and sparked international outrage via the UN Human Rights Committee delegation. A documentary exploring the crisis and its historical context by Abenaki filmmaker Alanis Obomsawin presents a portrait of the Mohawk perspective that serves as an alternative to mainstream Western media.

The federal government set up the Royal Commission on Aboriginal Peoples in 1991, which was a response to the Oka Crisis and many other blockades taking place all over Canada in the late 1980s. The RCAP’ s founding objective was to investigate and establish a “renewed partnership between the federal government and Aboriginal people and their structures of governance,” one that warranted an increase in political autonomy for Canada's aboriginal peoples [3]. This objective was in direct response to protests such as the Oka Crisis and the failure of the proposed constitutional amendments of the Meech Lake Accord that excluded negotiations on aboriginal self-governance (1987). The RCAP’S broad mandate was:

To compile the Commission's final report, it took 179 days of public hearings, 96 community visits, and an extensive research undertaking that lasted for over 5 years.

Report of the Royal Commission on Aboriginal People

The RCAP resulted in the Report of the Royal Commission on Aboriginal Peoples that was released in 1996. The final report consisted of five volumes and 440 recommendations ranging from governance to welfare, and to economic development that is to be implemented over a 20 year period. The most significant recommendations are as follows:

(1) implicit in section 35 of the Constitution Act 185, “self-government is an existing right of nations. Together, these nations comprise a third order of government, an order of government which is not inferior to, or a derivative of, other governments, but has its own sphere of influence or jurisdiction within which it exercises sovereignty;” thereby recognizing their inherent right to self-govern in international and domestic law

(3) the eradication of Aboriginal Development and Northern Affairs Canada (AANDC), its replacement with a 2-tier department for the implementation of this new relationship and provision of services to non-governed First Nations, as well as the introduction of an aboriginal parliament;

(6) A “fair distribution of land and resources” as well as a detailed program of economic revitalization including funding, employment, and education and training [4].

Critiques of the RCAP

The recommendations of the Final Report were met with both applause and critique, as each had positive and negative implications for the aboriginal community and their relationship with the Canadian government. One of the recommendations that sparked discussion was the suggestion that Aboriginal nations compose a third order government, which include the three models of aboriginal government that were presented. One of the primary critiques looks at the suggested inherent right to self-governance. The RCAP's vision of third-order government is dependent upon negotiated agreements and the understanding is that this third-order government remains based within existing federal structures. Clearly, this vision of self-governance imposes many limitations through the qualifications for self-governance (remove these words), as said aboriginal nations need to be “re-constituted in order to exercise their right to self-government” [5].

Before outlining the critique of the three models of government, each should be defined. The first model is a Nation government. This means the governance is territorially based with jurisdiction “operating on one or several reserves or Metis settlements...which has the ability to govern in both core and peripheral jurisdictions, delegate authority, determine its own citizenship, and incorporate elements of traditional governance”, with tests to good governance subject to the Charter of Rights and Freedoms. The second model is a public government, where Aboriginal people constitute the majority of the residents in a given territory . The third model is a community of interest government, which allows an Aboriginal government to operate “within the boundaries of other jurisdictions – constituted by voluntary membership” and could “exercise powers delegated from Aboriginal nation and provincial/territorial governments” [6].

Critics of these models have found three fundamental issues. First, it is inconsistent with the federal procedure of self-government negotiations and incongruent with the constitution when dealing with Indian Act bands. This is especially so since the RCAP recommended the ‘reconstitution’ of nations into sizeable entities capable of exerting legislative power, gain legitimacy, and dispose of necessary resources (financial, human & technological). Second, although it is a definite improvement to recognize traditional governments as legitimate political structures, this recognition conflicts with the federal Inherent Rights Policy (1995) which predetermines the exercise of self-governance only through agreements with land-based groups and specifically Indian Act band councils. Third, it assumes that any structure of governance equates to Aboriginal government, be they Band Council or traditional governments. However it could be problematic if the population does not recognize the political authority of those structures.

Although such models have not been implemented as set out by RCAP, these critiques remain significant reference points in the discussion of aboriginal self-governance and the Royal Commission on Aboriginal Peoples.

Enacted in 1999, the First Nations Land Management Act (FNLMA) delivers the right to First Nations to legislate their own laws in relation to reserve land, natural resources and the environment. The framework agreement was originally signed by the Canadian federal government and fourteen First Nations communities in 1996. It was the first step towards First Nations assuming control over their own lands on their reserves a move which is hoped will encourage on-reserve investment and thus increased economic self-sufficiency [7].

Indian Act property rights cause major setbacks in terms of economic development for First Nations as reserve land is held in trust by the Crown creating an unsecure tenure system and high transaction costs, a deterrent to on-reserve investment opportunities. Federal involvement in land transactions creates difficult barriers due to extremely long processing time requiring many levels of approval. Additionally, in Canada, there are three types of property rights specific to reserves, and which differ from non-reserve property. The first type is the customary right, which recognizes traditional land occupation by particular families. The customary right, however, is not recognized in the Canadian courts, and is subject to dismissal by the Band Councils without any recourse. The second type is the certificate of possession legislated by section 20 and 58 of the Indian Act and recorded under the Indian Land Registry. It is recognized by the Canadian courts but transactions can only be made between Band members. The third type is a lease, which under section 38(2) of the Indian Act bands can ‘conditionally surrender’ or ‘designate’ reserve land to the Canadian government for leasing purposes. This type of property right is recognized by the Canadian courts and because it functions as a seizable asset it encourages on-reserve investment. Nevertheless, leased land remains reserve land, the community does not lose its property rights [8].

The FNLMA has changed some legal aspects of these property rights. First, it allows First Nations to develop their own lands and not be subject to the Indian. To break from the restraints of the Indian Act, a First Nation must write up a land code, come to a funding agreement with INAC, and have the community vote on the land code and funding agreement. Once the vote has passed in favor for both the land code and the funding, the land code is certified and the land is now under the control of the First Nation. Second, customary rights are recognized as formal land ownership and cannot be denied to the Band members who hold them. Third, land disputes are kept within the community and dealt with efficiently and quickly. Forth, the federal government is excluded from any land transactions, which expedites these transactions exponentially faster than when under the federal jurisdiction. Finally, land can be expropriated for community interests such as building schools or accessing natural resources but with the consent of band members as per the community land code [9].

Despite the lack of implementation of the RCAP recommendations pertaining to land tenure, the passing of the Land Management Act has had some success in encouraging on-reserve investment and curbing the limits to land ownership imposed by the Indian Act. Should First Nations communities be allowed to continue to self-govern and make decisions in regards to the allotment of their land, the future of their community will surely be decided by the Aboriginal policy makers which is paramount to the success of their people.

You Are On Indian Land. Dir. Morn Mort Ranson. National Film Board of Canada, 1969.