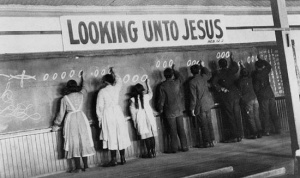 The effect of the Residential schools on Aboriginal culture was well described by Ross (1996) in his Exploring Aboriginal Justice “Residential schools were not the solitary cause of social breakdown amongst Aboriginal people…they were the closing punctuation mark in loud, long declaration saying that nothing Aboriginal could possibly be of value to anyone.”[1] Ross’ studies have drawn similar comparisons to those of David King whose A Brief Report of the Federal Government of Canada’s Residential School System exposes the Canadian government’s intentions of killing Indian cultures by converting the Native mind-set into replicas of European standards and integrating them completely into the colonial modernist infrastructure. The reasoning stated by then deputy minister of Indian Affairs, Duncan Campbell Scott in 1920 was, “to get rid of the Indian problem…[and] to continue until there is not a single Indian in Canada that has not been absorbed into the body politics and there is no Indian question, and no Indian Department.”[2] King voiced the school’s goal of austerely insisting on the learning of English as a federal policy, “The federal government believed that Inuit who knew English would find jobs as the Southern economy moved North.”[3] The federal government felt that there was no use for Indigenous cultures within Canada and believed that Indians would be better off if they assimilated to Western lifestyles. In 1884 the Indian Act was amended to include compulsory residential school attendance for status Indians under age 16.

The history of residential schools is marked by countless tales of negligence, abuse, and physical and sexual violence.[4] The Report of the Royal Commission on Aboriginal People (1996) indicates that the experiences of most children forced to attend residential schools involved neglect, underfunding, and widespread abuse, high death rates from tuberculosis, overcrowding, lack of care and poor sanitation.[5] Indian residential schools were put in place to primarily teach Aboriginal children that their ancestral ways were wrong and corrupt. The schools were a branch of the colonialist assimilation project. By taking the Indian youth and teaching them to be Canadians under the British crown rather than faithful and proud members of their Indigenous Nations, they could slowly undermine every aspect of Aboriginal culture and ways of life. Over the period 1800-1990, over 130 residential (boarding and industrial) schools had existed at one time or another. The number of active schools peaked at 80 in 1931. In the early 1900s about 1/6 of children between 6 and 15 attended these schools. Geoffrey York reports that by the 1940s, about 8,000 Indian children – half of the Aboriginal student population– were enrolled in 76 residential schools across the country.[6] 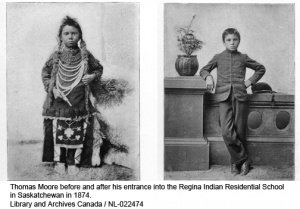 Residential schools were designed to rid the Aboriginal children of their language and culture through forced displacement from communities, which created a breakdown in the intergenerational transfer of knowledge and undermining traditional social structures. This was eventually seen as a wrong course of action taken by the State and the United Church, who apologized in 1986 followed by the Catholic Church in 1991 and the Church of England in 1995.Though the church and the State sanctioned the events that took place in those schools, it took several more years for the government to take responsibility for its role in the assimilation and cultural genocide caused by residential school systems. An Aboriginal Healing Foundation (AHF) was finally created in 1998 with a $350-million grant from Indian and Northern Affairs Canada to help former students who were physically or sexually abused in the residential school system. 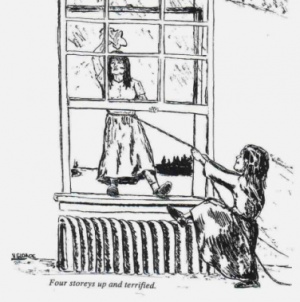 The foundation gave money to more than 130 groups and initiatives across the country, including women's shelters and the Yukon-based Committee on Abuse in Residential Schools. It also funds 12 different projects in Nunavut that support former residential school students. Addictions, victimization, and sexual and physical abuse are some of the severe participant challenges affecting the majority of healing projects.[7] Between 1999 and 2004 a total of 111,170 individuals attended healing activities and 28,133 individuals participated in traning activities.The bulk of the AHF resources was dedictad to healing projects or 70.9% (over $265 million), follwed by 11% (over $41 million) for prevention and awareness and 7.1% (over $26 million) for training activities.[8] Although policy changes did take place, which aimed to specifically address the legacy of physical and sexual abuse suffered by residential school survivors, the apology did not appear to be a commitment or indication of change to future policy regarding indigenous people as the AHF's funding was cut in March of 2010.

By 2005, 13,400 civil suits for damages inflicted (neglect, sexual abuse, loss of culture & language) and a class action suit representing 90,000 former students against the federal government and the churches were launched. These legal actions led to the Indian Residential Schools Settlement Agreement, the largest class-action settlement in Canadian history.In 2006, the Truth and Rreconciliation Comission was establiseh with the mandate to:

(b) Provide a holistic, culturally appropriate and safe setting for former students, their families and communities as they come forward to the Commission;

(c) Witness1, support, promote and facilitate truth and reconciliation events at both the national and community levels;

(d) Promote awareness and public education of Canadians about the IRS system and its impacts;

(e) Identify sources and create as complete an historical record as possible of the IRS system and legacy. The record shall be preserved and made accessible to the public for future study and use;

(f) Produce and submit to the Parties of the Agreement2 a report including recommendations3 to the Government of Canada concerning the IRS system and experience including: the history, purpose, operation and supervision of the IRS system, the effect and consequences of IRS (including systemic harms, intergenerational consequences and the impact on human dignity) and the ongoing legacy of the residential schools;

The long history of assimilation made possible in large part by the Indian Act aimed to control Aboriginal life in every possible way. In this context, education became the primary vehicle to achieve the goal of assimilation rather than to empower Aboriginal children. Residential schools were created in order to prepare the native youth for assimilation in to Canadian society. The oppressive colonial approach and methods carried out through the residential school system lead to loss of language, traditional spiritual practices, and culture. The residential school systems have caused a lot of complicated inter-generational trauma for Aboriginal communities and the impacts continue to be felt to this day. There is still a lot of healing to be done around the trauma residential schools brought to Indigenous communities around Canada.