In traditional native societies, women have always played an important role in the decision making process of their communities. They were caretakers of the land and household, and had central power in matters of family, marriage, politics, ceremonial life and food storage and distribution. Despite the fact that not all native nations were matrilineal, their people, because of the key functions women played, had always regarded women with respect they performed for the communities. They were known to take on male roles in times of need and their power of “life giving” was highly valued [1]. The processes of colonization, however, with its assimilationist patriarchal institutions and implementation of Eurocentric policies and legislations such as Indian Act, has made women subject to oppression, discrimination, marginalization and victimization.

Indian Status under the Indian Act

Women have lost their status, authority and independence to Eurocentric religion, customs and laws. The church and new political system subjugated them by spreading sexist and racist stereotypes and by removing them from valued positions in their communities and transforming them into “subordinate subjects” to men according to the dominant white culture’s values [2]. While the government strived to deprive women from their control over land for economic and political purposes, the missionaries painted women as dissolute mothers and deviant wives in order to impose and uphold European colonial regime. An important example of this was The Gradual Enfranchisement Act, which forced women to become members of their husband’s bands, had their Indian status revoked if they married a non-Indian, and their rights to inheritance transferred to their husbands. In addition to being prohibited from voting or running in the elections, women were denied participation in local bands and in matters of reserve land-surrender decisions[3] . The segregationist policies of Eurocentric regime had stripped native women of rights and undermined their sense of identity for the years to come.

Assembly of First Nations (AFN) National Chief Phil Fontaine speech to the Senate Committee on Aboriginal Peoples (Canada), hearings on Bill C-292, An Act to Implement the Kelowna Accord, April 16, 2008

Similar to the Gradual Enfranchisement Act, Section 12(1)(b) of the Indian Act was introduced in 1951. This section forced any woman who married a non-status Indian to relinquish her rights and “Indian” status immediately and were forcibly enfranchised. Children of women who had married non-status men after 1951 also lost their entitlement to registration. Under Section 12(1)(a)(iv) children of women whose mother and grandmother did not have status before marriage but who married Status men after 1951 also lost their entitlement to registration after the age of 21. This is known as the “double mother” rule.

These pieces of legislation and their impacts upon Aboriginal women had severe implications. Being forced to leave their communities put women at high risk of homelessness, poverty, sex work, violence, and loss of family connection [4].

Women who fought this sexist discrimination were met with strong opposition from the National Indian Brotherhood who felt fighting sex discrimination in the Indian Act threatened the sacred rights which the act secured. [5] After exhausting domestic options, Sandra Lovelace, a Maliseet women from the Tobique Nation took her case to the United Nations and argued that section 12(1)(b) was in violation of the International Covenant [6]. The UN determined that the Indian Act denied Lovelace her cultural rights, and in 1982 she won her case. In 1985, in response to the UN decision, and the cases of Mary Two-Axe Early, Jeanette Corbiere Lavell and Yvonne Bedard, the Canadian government passed Bill C-31. This Bill had the supposed intention of removing gender discrimination, and restoring status and membership to eligible individuals. 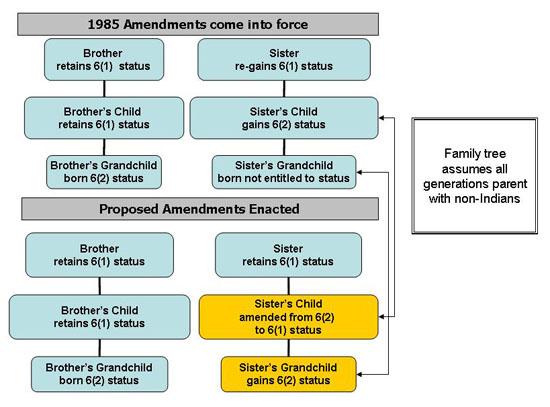 The family tree of a brother and a sister where the sister has lost status as a result of her marriage prior to April 17, 1985 source

The implementation of Bill C-31 proved to be both a blessing and a curse. With the Bill, women were now no longer forfeited their status to marry whom they pleased, however with that, rather than removing gender discrimination, new classifications of Indians were created[7]. Women who had their status reinstated became “6(1)”s and children with only one registered Indian parent, became “6(2)”s. With the creation of these new categories, Indians would only be able to pass on status to their descendants if the other parent of the child was also a status Indian, also known as the “second generation cut-off”[8]. This would ensure that many Indigenous people would continue to lose their status. One of the key issues with the Bill was that it failed to address the effects that the of excess new members with reinstated status proved to have had on the increased demands on bands that may be unable to accommodate Indigenous women due to an already poor standard of living and lack of resources on the reserve[9]. Simply put, the Bill C-31 has created additional problems for Indigenous women and their children. Overall, Twenty years after the bill was created, the Canadian government still fails to address discrimination that was legislated through Bill C-31.

Bill C-3 Gender Equity in Indian Registration Act is Ottawa's response to McIvor v. Canada, a 2009 B.C. Court of Appeal. Sharon McIvor and her son Jacob Grismer challenged section 6 of the 1985 amendments (Bill-C32) in BC Court on basis that status provisions contain residual discrimination in its “second generation cut-off” rule and is contrary to section 15 of the Charter.[10]

As a male Status Indian, Jacob Grismer is considered 6(2) because his mother is Status Indian but not his father. Because he had children before the 1985 amendment (regarding section 6) with a non-Status Indian woman, he cannot pass status to his children. Had Sharon McIvor been a man, his son would have had 6(1) status under the 1985 legislation. Thus, the grandchild (with a non-Status woman) would have been a 6(2) Status Indian (Double mother rule). The court ruled that Section 6 of the Indian Act violates Section 15 of the Canadian Charter of Rights and Freedoms. Bill C-3 was enacted in January 2011 to address the ‘second-generation cut-off’ and the ‘double mother’ rule.[11].

The Indian Act denied the identity to native women; they no longer had a voice because they were now recognized only through their husband’s identity. The 1869 Gradual Enfranchisement Act proved to be discriminatory against women as it stated that the owners of the land must be Indian males. Land holding systems and matrimonial property was transformed into a system of patriarchy by the Canadian government leaving First Nations women with no legal protection as provincial matrimonial law does not apply on-reserve. As a consequence, women have tended to stay in abusive relationships because they have no other option of providing food and shelter for their children. Even today there is still a great need for recognition of women’s rights amongst Native communities and a strong need to address self-empowerment. Many organizations such as Native Women’s Association of Canada (NWAC), Indian Rights for Indian Women (IRIW) and others alike exist, but it is still not enough to compensate for the complex issues that Aboriginal women face.

In short, European colonization with its patriarchal regime and “white” legislations such as the Indian Act and Bill C-31 had devastating effects upon the identity of native women, robbing them of their traditional and cultural rights and removing them from their rightful places in the economic and political development of their communities. Today, thousands of aboriginal women are struggling from oppression, marginalization, discrimination and victimization that were the outcome of the colonial regime and its policies. Even though today many indigenous women are slowly regaining their authority within their communities and society as a whole, full recovery from the incredible damage that has been done is still a long way ahead.